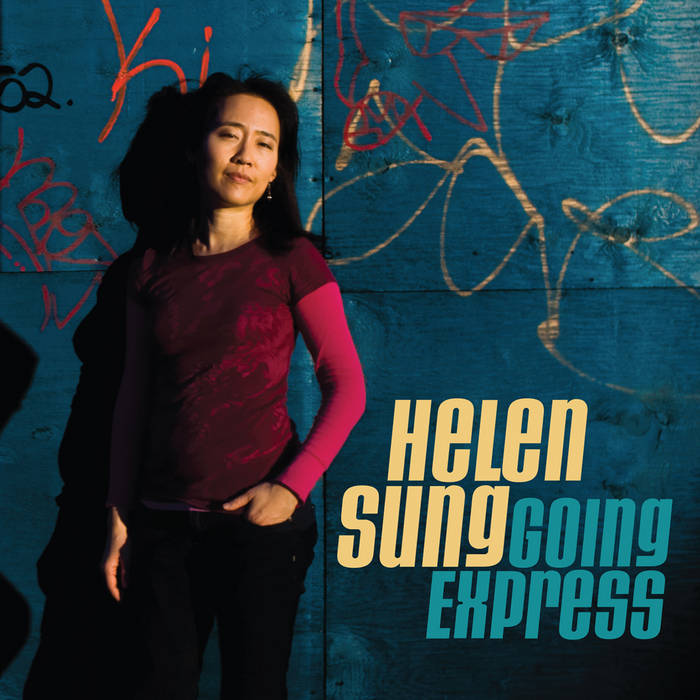 “I've heard that live recordings are ‘easier’ to produce than a studio session, but I think it's a different animal with its own set of potential issues. There are the obvious ones - one can't stop and "start-" or "do-over": one doesn't have as much control over the sound environment, and ... there is a live audience out there!” - Helen Sung

When you get right down to it, there are only two kinds of recordings: studio projects, where sound can be edited and manipulated ad infinitum, and the live date; where the artist and the ensemble are documented in the throes of spontaneous creativity in the arena of the bandstand, devoid of signal processing.

It is in that arena of art where the astonishing, Texas-born, Asian-American pianist/composer/bandleader Helen Sung makes her poetic and propulsive self felt on Going Express, her latest Sunnyside CD, and follow-up to her celebrated Sungbird (After Albeniz) recording on the same label. Recorded at Manhattan’s Jazz Standard in 2009, Sung leads a spirited quartet featuring bassist Lonnie Plaxico, drummer Eric Harland, and tenor/soprano saxophonist Seamus Blake through a pleasing program of standards and originals that reveal in real time her grand gifts.

Displaying skills that blend Chopin and Bill Evans, both from the European and American classical idioms, Sung’s compositions – the uptempo opener “Going Express,” the percussive “Bittersweet,” and boppish ditty “Hope Springs Eternally” - are definitely in the pocket and deep in the groove. Her renditions of Me’shell Ndegeocello’s “Bitter,” Cole Porter’s “Love For Sale,” Billy Strayhorn’s “Lotus Blossom,” and Thelonious Monk’s “In Walked Bud” and “Eronel” revive time-honored favorites with vivid and vivacious Latin, waltz and tango tinges.

Helen Sung’s unbounded approach to the music began in Houston, Texas, where she grew up on the European classics beginning at the age of five and ultimately graduating from that city’s prestigious High School for the Performing and Visual Arts (HSPVA), which also counts Eric Harland and Robert Glasper as alumni. She earned her Bachelor and Master of Music degrees in Classical Piano from the University of Texas at Austin; she was turned on to jazz after she heard Harry Connick, Jr. and Tommy Flanagan.

“I only wish I had pursued jazz sooner!” Sung told Jersey Jazz in 2007. “In my experience, it’s a generally held belief that classical training, when done right, teaches one how to play the instrument with good technique, thus preventing physical injuries/problems (tendonitis, muscle strain, etc.)…so it’s seen as an advantage. I think my technique allowed me to quickly move into dealing with ‘jazz stuff’ (swing, feeling, vocabulary, etc.) versus struggling with the notes.”

Sung was the only female accepted into the inaugural class of the Thelonious Monk Institute of Jazz Performance at the New England Conservatory of Music. After graduating, Sung settled in Boston, gigged with bassist Ray Brown, and taught at the NEC’s Continuing Education Program.

Now based in New York City, Sung has gigged with a number of leaders and groups, including Slide Hampton, Benny Golson, Regina Carter, T.S. Monk, Steve Turre, and the Mingus Big Band. She has been featured on Marian McPartland’s NPR radio series Piano Jazz, XM Satellite Radio’s In the Swing Seat with Wynton Marsalis, and In Performance at the White House. In 2007, Sung won the Mary Lou Williams Women in Jazz Competition.

Those musical gifts and far-flung experiences illuminate Helen Sung’s artistry on Going Express, a star in the galaxy of live jazz recordings. “Of course, [there are many things] that can give live recordings a special energy -- an excitement and immediacy that might be harder to capture in a studio recording,” Sung says. “An extra wrinkle: we only had one evening (normally one tries to have at least two nights of playing) -- so we essentially played the same set twice, which is a lot of music. Fortunately I had a top-notch band!”

Bandcamp Daily  your guide to the world of Bandcamp